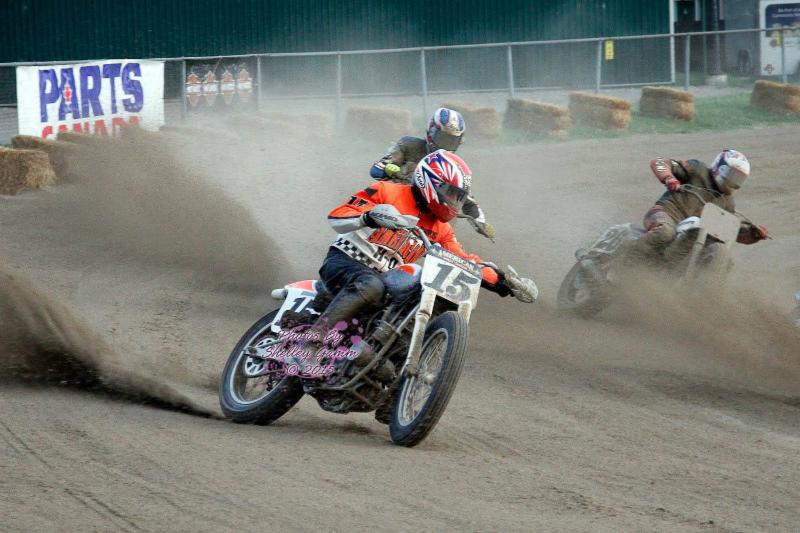 Saturday May 16th was the Flat Track Canada opener for the 2015 Championship Series! In threats of bad weather racers from all over Ontario, Quebec, Michigan, New York and even Illinois all came to ride the battle of the deep cushion. There’s absolutely no way really to describe how it is to ride the deep rutted and challenging surface of the half mile track at the Paris Fairgrounds other than it’s thrilling and very addictive. 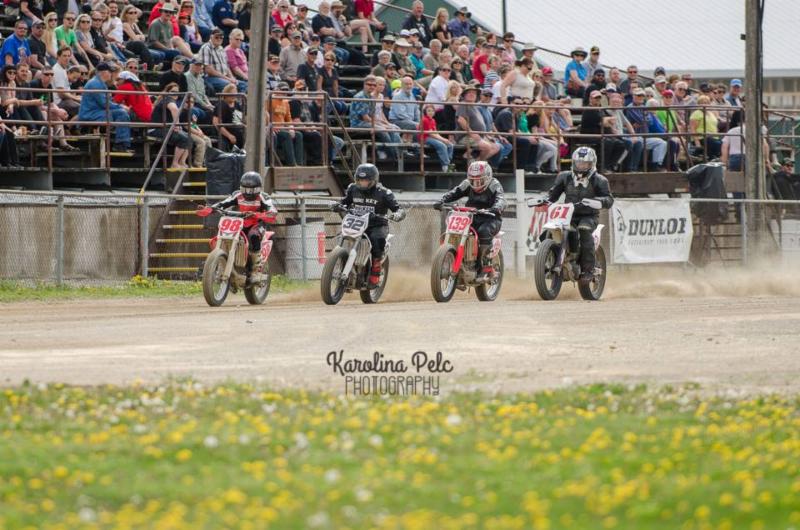 A very promising 151 entries showed that there’s been an increase in interest in the sport of flat track. Not only did we see a surge in American racers, but a number of newcomers including a large number youths and adults. It seems to be a growing trend worldwide for road racers to take the stage in flat track racing since the influence from Marquez and Rossi. Last year Canadian Superbike Champion Jodi Christie and Canadian Super Sport Champion Kenny Reidmann competed in a couple of rounds of the FTC series. This year Canadian Superbike champ runner-up Trevor Daley gave flat track a try at the Paris Half mile, he was joined by the likes of other national road racers such as Kris Garvie, Ross Milson, and Tomas Casas. Well Daley showed a very impressive ride having a second and a first in his heats. In the DTX final after falling he still finished 7th and in the Open Intermediate final he pulled off a very impressive 4th place. As for the other road racers, Garvie placed 7th out of 17 in both Novice classes, with Casas finishing 8th in the Intermediates, pretty impressive with full fields. A slew of other amateur road racers were there competing giving the excuse that flat track is just too much fun without forking out a ton of money or committing a full weekend. 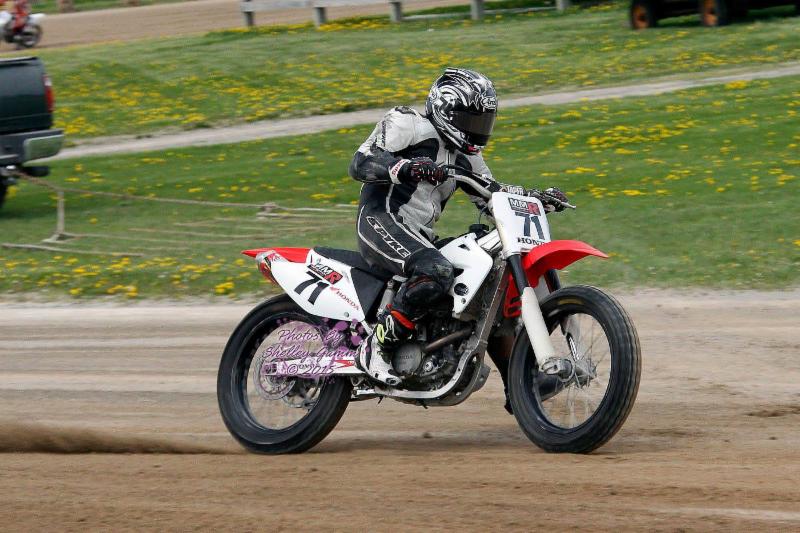 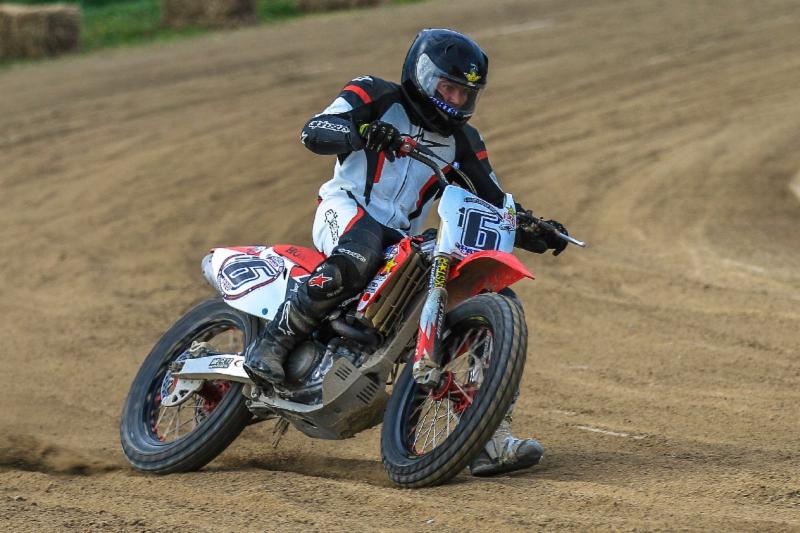 The big news of the weekend was the absence of reining Canadian Champion Don Taylor. Don’s wife is pregnant and overdue on her birth, therefore made a very difficult decision to miss out on the racing. That leaves a large opportunity for the championship to be up for grabs for 2015. In the Open Expert heat races, Steve Beattie and Chris Evans battled like they were in their 20’s, displaying the best racing and a top notch show. Beattie racing the small 450cc Honda and Evans on the 750cc Harley Davidson played tango on the race track swooping in passes turn to turn. The main event was poised as the one to watch as Bugs Pearson from Illinois rode his Water’s KTM 990 to a heat race victory over young fast GNC2 Daytona winner Justin Jones and 2014 FTC runner up Tyler Seguin. 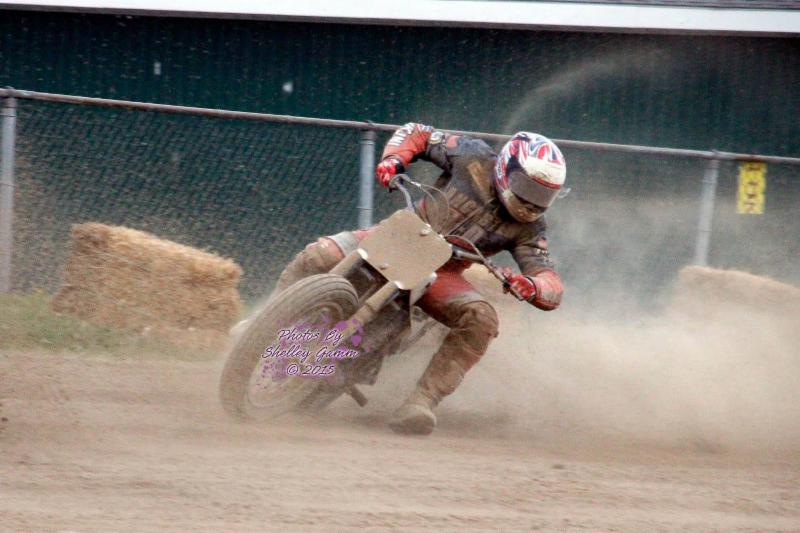 In the DTX main event it was New York’s Justin Jones bringing home a comfortable win on his Yamaha YZF450 over Tyler Seguin on his KBR sponsored Honda CRF450. 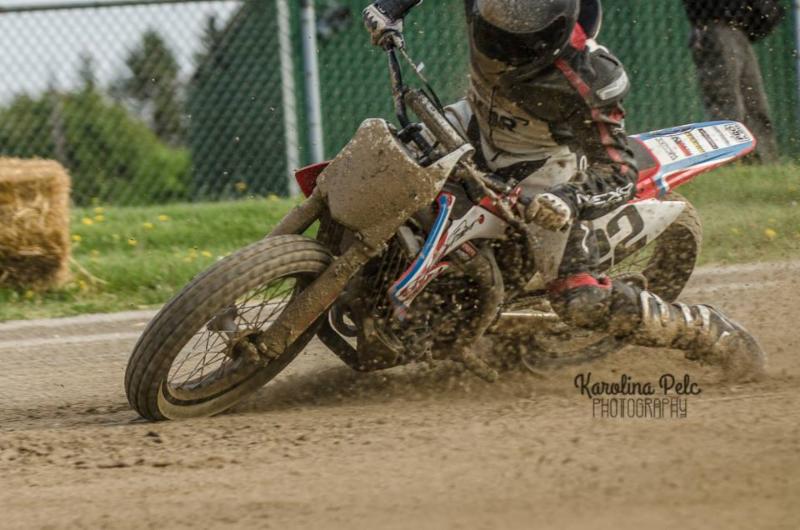 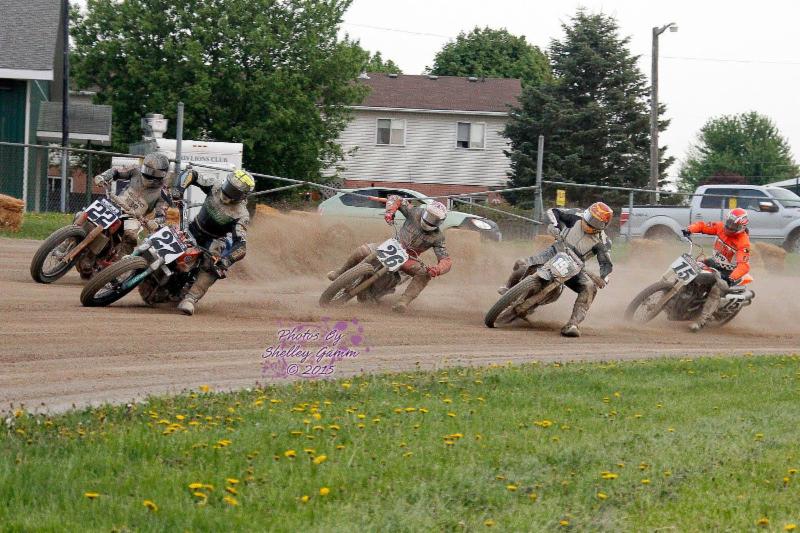 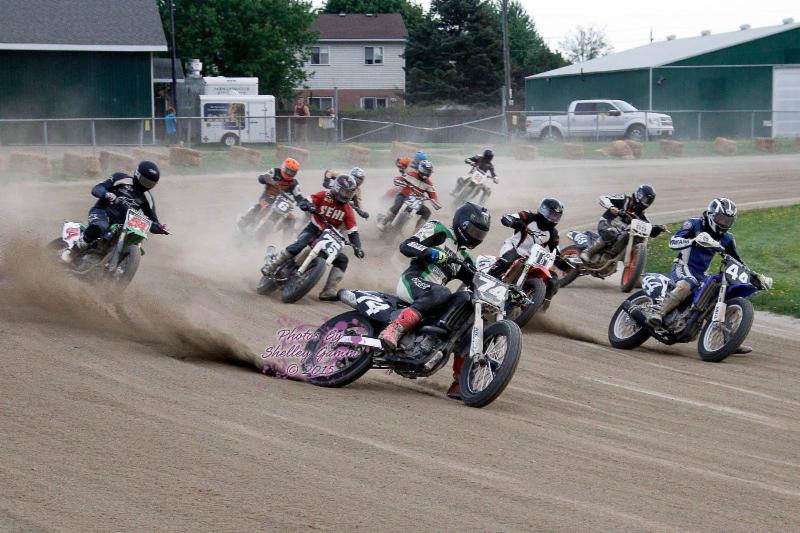 The Open Expert final turned out to be probably Flat Track Canada’s greatest races and probably one of the best half mile races in Canada. For lap after Lap corner after corner fans were on their feet and cheering for the passing amongst the leading riders. First it was Tyler Seguin and Rob ‘bugs’ Pearson with the early battle. After only a couple of laps Seguin faded fast and it looked like a hungry Chris Evans warped from 1999 and put the pressure on Bugs Pearson, from that point on the race was spectacular. Bugs on the 990 KTM banging and crashing into Evans XR750 Harley, handle bar to handle bar they went for about four laps and then out of nowhere, Steve Beattie threw himself into the mix on his KBR Honda CRF450. Bugs started to fade at about the halfway point of the 15 lap main with the fan favourite, Doug Lawrence sitting back in about sixth position. The race was a constant battle between Evans and Beattie, with Beattie navigating his smaller nimble bike quickly through the turns, Evans would challenge back in the straight-aways showing off the big horsepower of the Harley. It was very neat to see and typically you’d only get to enjoy this big bike- small bike kind of battle here in Canada. As the last couple of laps to go it looked like Evans was in control of taking home the win, but as this point all eyes were on Doug Lawrence who went from sixth place to second in only a matter of a couple laps. The pressure was on and Chris knew Lawrence was coming, only a few more moments he had to hold on as the rough demanding track had taken its toll on the +50 year old Evans. As the riders come out of the final corner to the checkered flag, I vividly remembering watching Evans throw himself on his fuel tank just using every last bit of energy to bring it home for the big win! Well deserved and another very well respected win for Chris Evans. 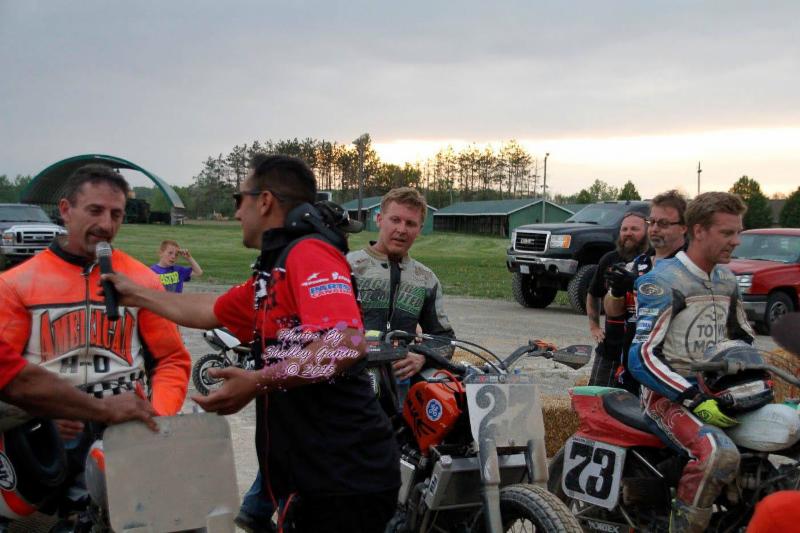 In the Intermediate class Buchan came out with a big win in the DTX class with Braden Vallee finishing second despite having to start from the third row. In the Open Int, Buchan struggled with bike issues on his Kawasaki Twin, therefore leaving the door open for Braden Vallee who edged out Justin Crumb for the victory. Front runner Shane Corbeil struggled while blowing his engines in the heat races. 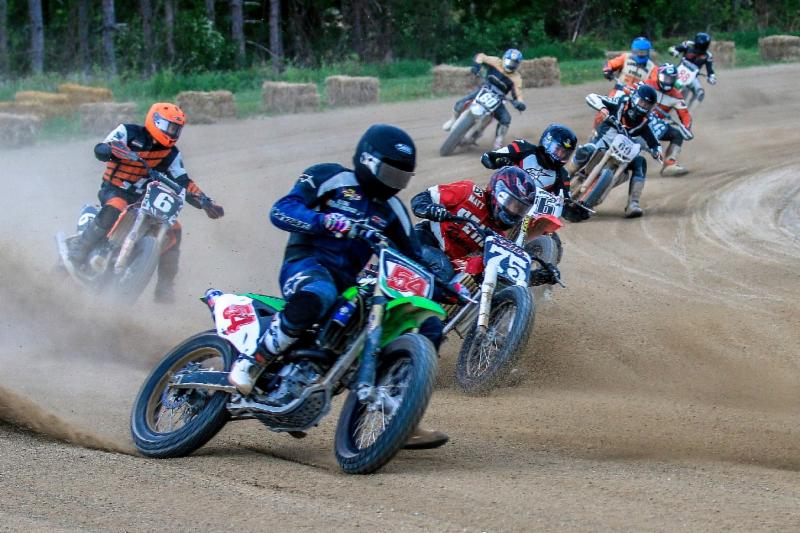 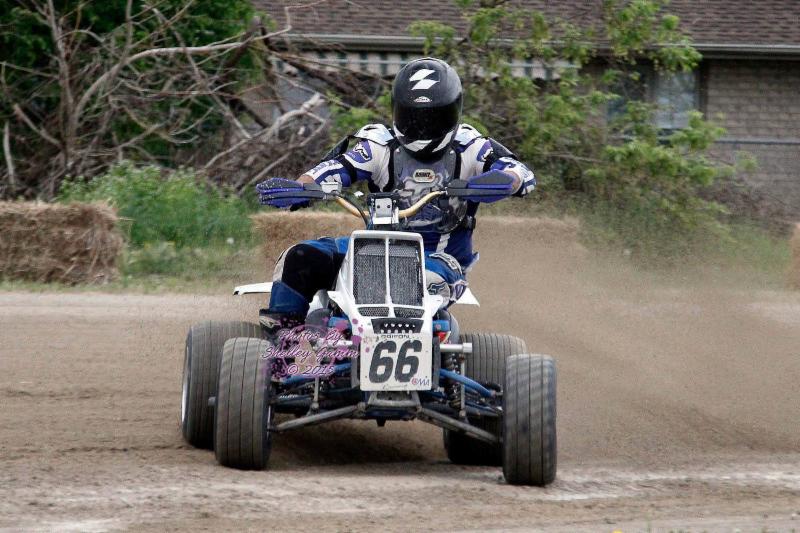 Another highlight was young superstar Dallas Daniels who made the trek from Illinois. This 11 year old showed he could run with the big guns and did an awesome job handling his bike to 3rd in the Novice class. Dallas also took home a win in the 250 class. Very promising performance and I’m sure we’ll see him back again. 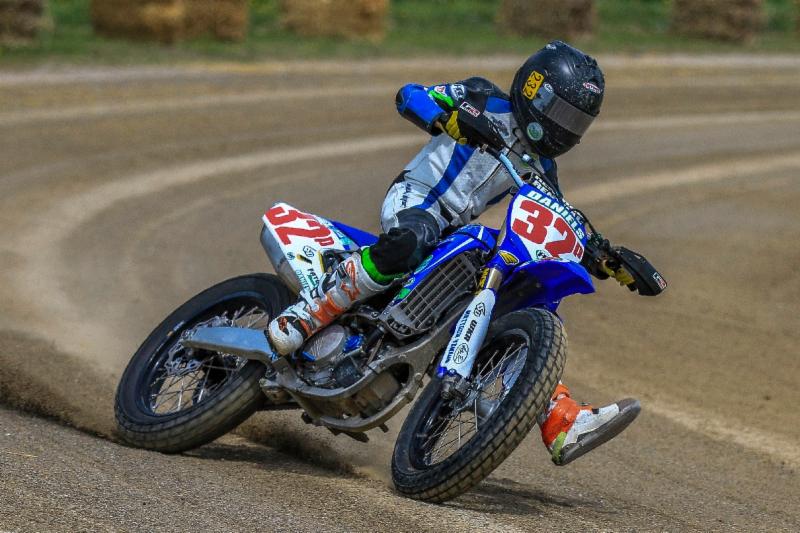 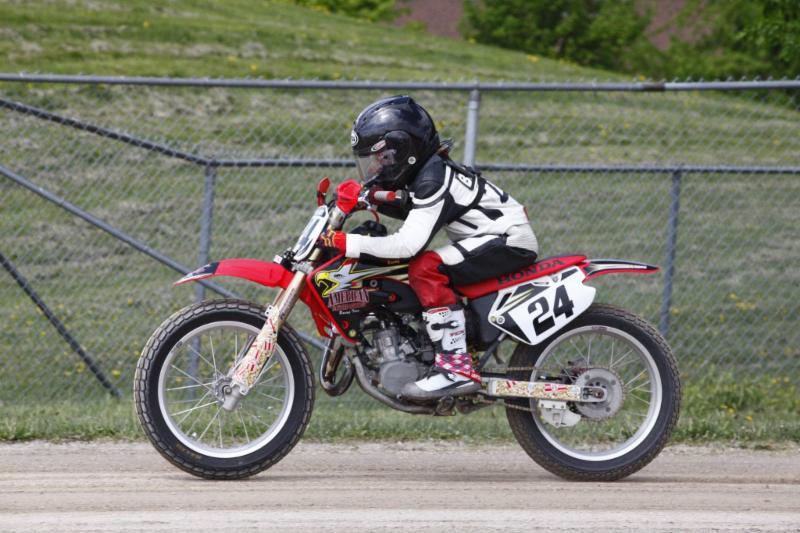 We like to thank everyone for coming out and supporting, bike time thank you to all of the volunteers and a big thanks to our sponsors: Parts Canada, Harley Davidson, Suzuki, Diesel Equipment, Honda Canada, Dunlop, Kawasaki Canada, Sturgess Cycle, Grand River Powersports, Town Moto, Klotz, & Outlaw Productions.

We hope to see everyone this Saturday in Burford!