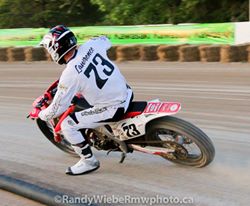 Round 3 of the Flat Track Canada Championship Series returned to the Welland County Speedway, where the weather was beautiful and the riding style changed drastically on the clay quarter mile. The track shaped up to have a 25 foot groove which made some interesting racing, but the conditions became very slick making it difficult to pass. 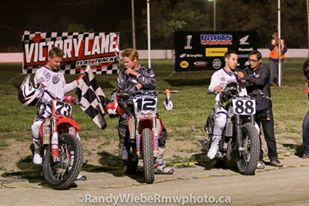 The day kicked off with amazing racing with the DTX expert heats. The 6 lap heat race saw Brandon Seguin, Tyler Seguin, Chris Evans and Mike Labelle all get a chance at leading, and throughout the whole race a blanket could’ve covered the four riders showing an impressive start to the night. 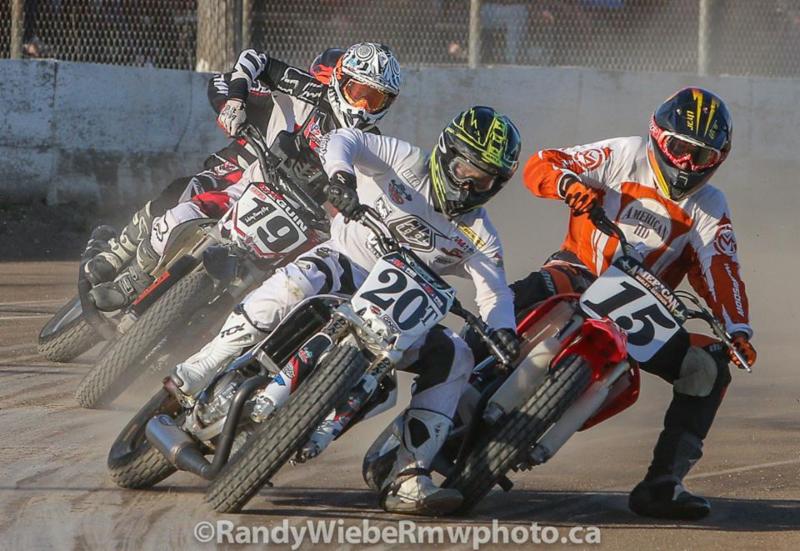 Another pleasant surprise of the evening was to see Doug Lawrence fly straight in from Texas, just to compete at his favourite venue of the Flat Track Canada series. Lawrence was the only rider to represent Canada in the X Games, bringing home a satisfying 7th place overall at the X Games event. Jet lagged and fired up, Doug managed to pull off back to back wins in the DTX and Open classes. He did struggle with his starts through the night, and had to come through the field each time (in typical Lawrence fashion), his battle with Tyler Seguin for the first half of the DTX final was very impressive to watch. In the Open Expert race it was Doug Beattie that held off Lawrence for more than the half way point before Lawrence made his move for the win. Tyler Seguin opens up the gap in DTX Expert points sitting in a comfortable 19 point lead over Sean Hoy. 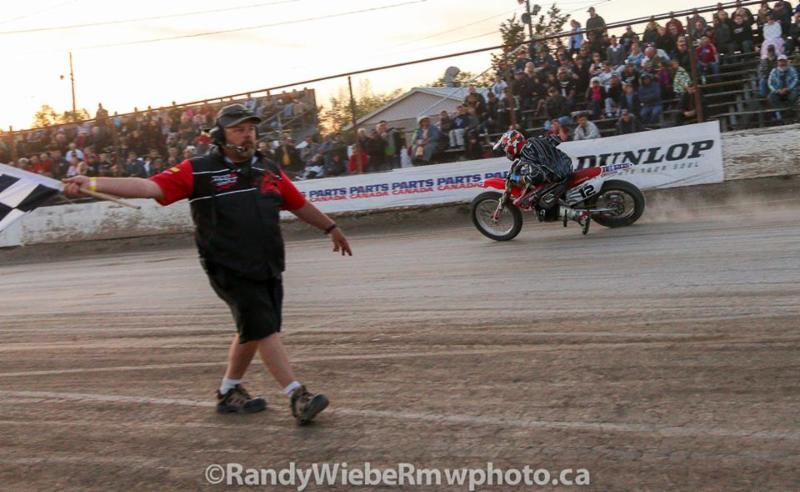 The Intermediate grids were full and shaped up to be the race class of the evening. Dustin Lambert of Welland, ON had a major crash at Round 3 in Burford, yet redeemed himself to take back to back wins in the Intermediate class. Dustin seemed to be unstoppable all night. Josh Dolan held off Brodie Buchan for second place in the open class, with Dolan taking another second in the DTX holding off Kristy Dulaj. Points leader Braden Vallee finished 8th, tightening the points race. It looks like the Intermediate championship is very competitive this year, leaving the title vulnerable to a large group of riders. 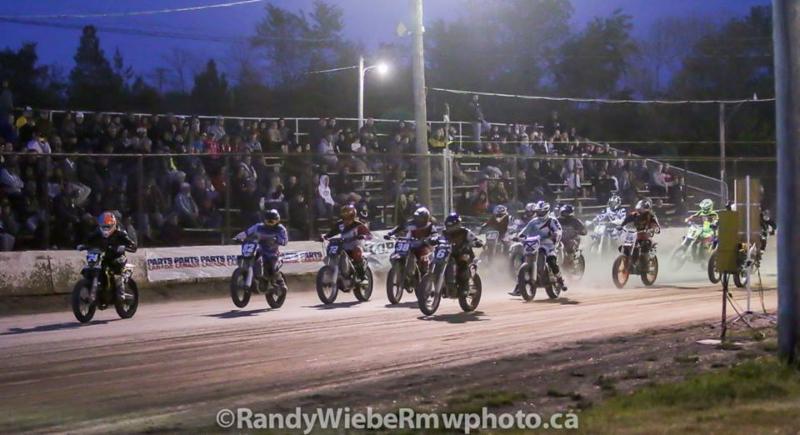 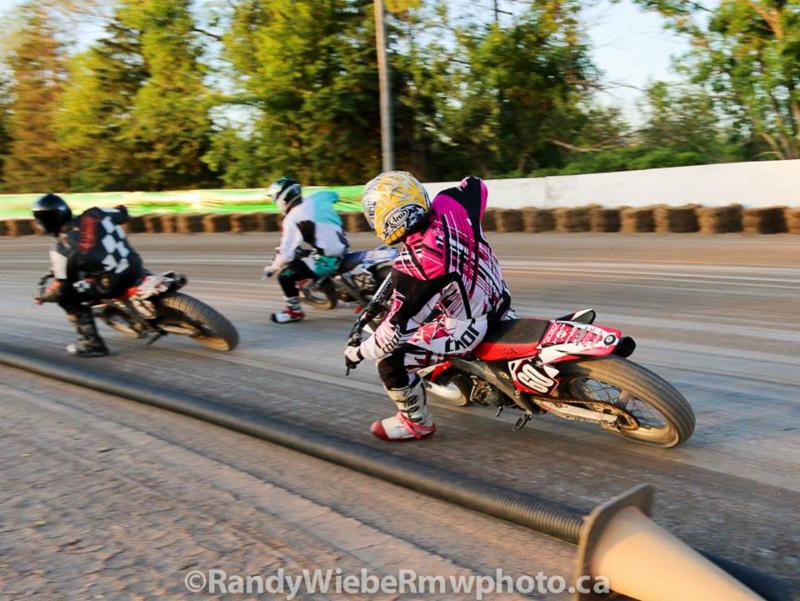 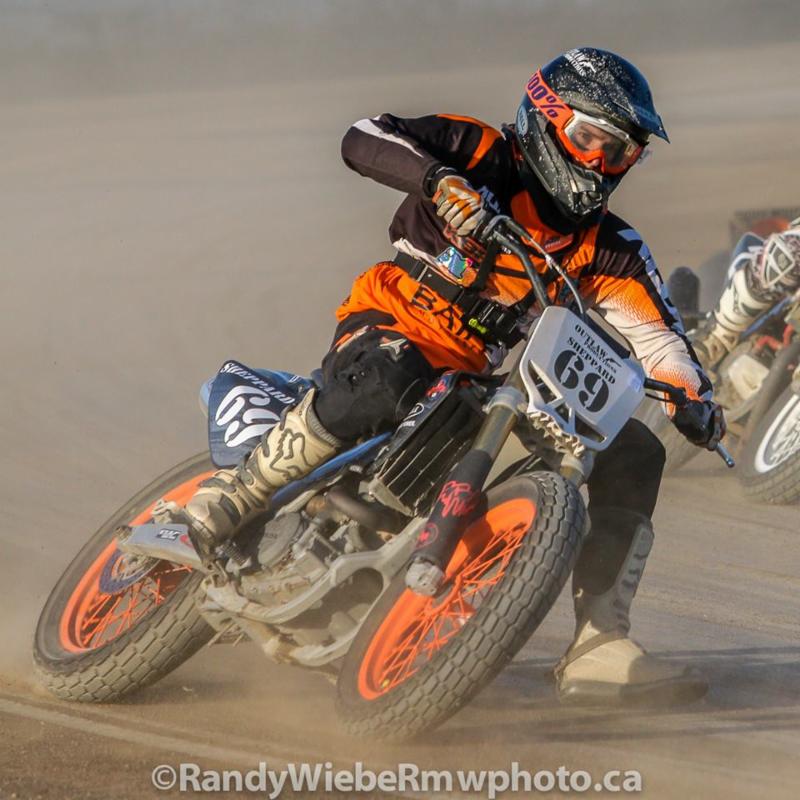 In the Novice ranks, young Dustin Brown of Muskoka, ON, aboard his Honda CRF450 continues to dominate the competition with another set of back to back wins, still going undefeated in 2015. It looked like the real battle was between Trent Pickle of Wheatley, ON and Logan Wilson of Erin, ON both on Honda’s. Logan pulled off a second in the DTX while Pickle made a big pass for second in the open final. 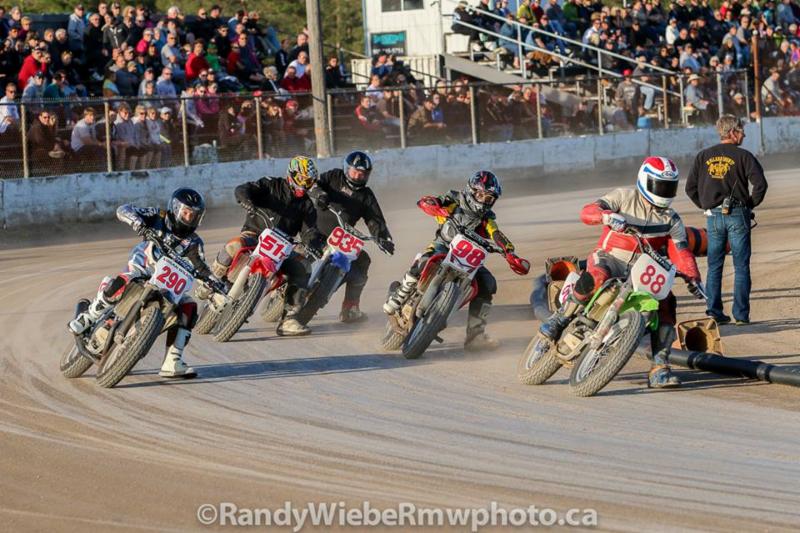 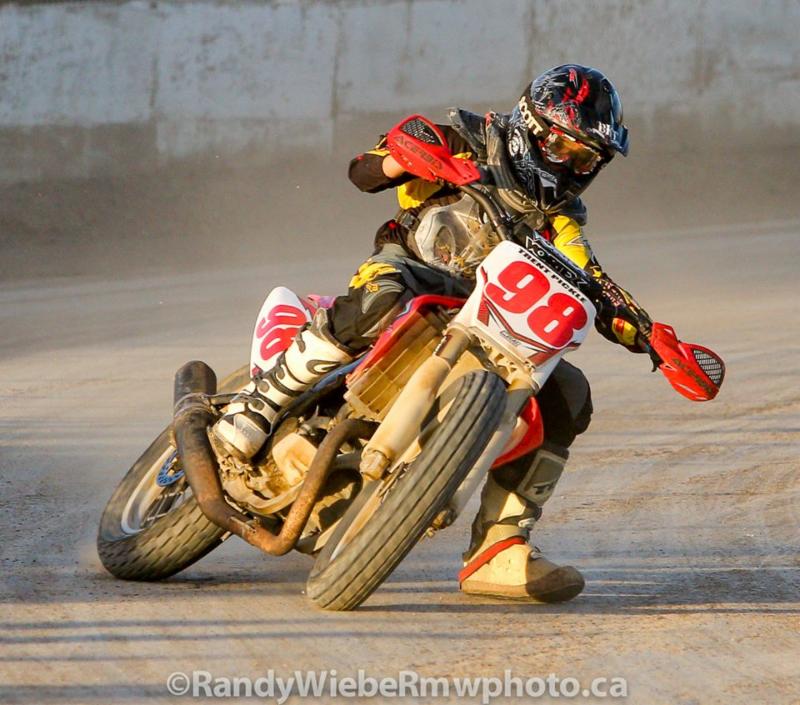 In the 85cc class Hunter Bauer won again in front of the hometown crowd on his Honda. Second place went to a hard charging Boyd Deadman, with Jimmy McCullough finishing third. 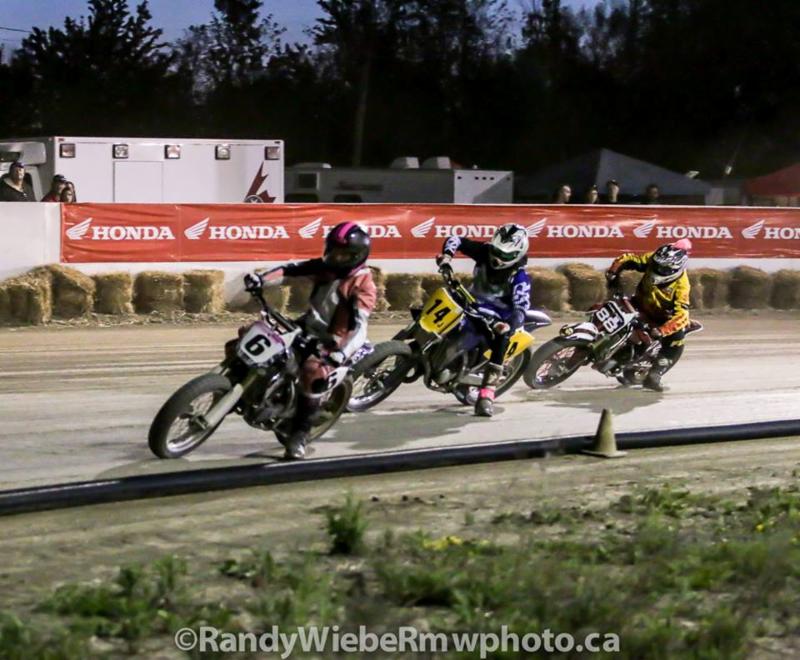 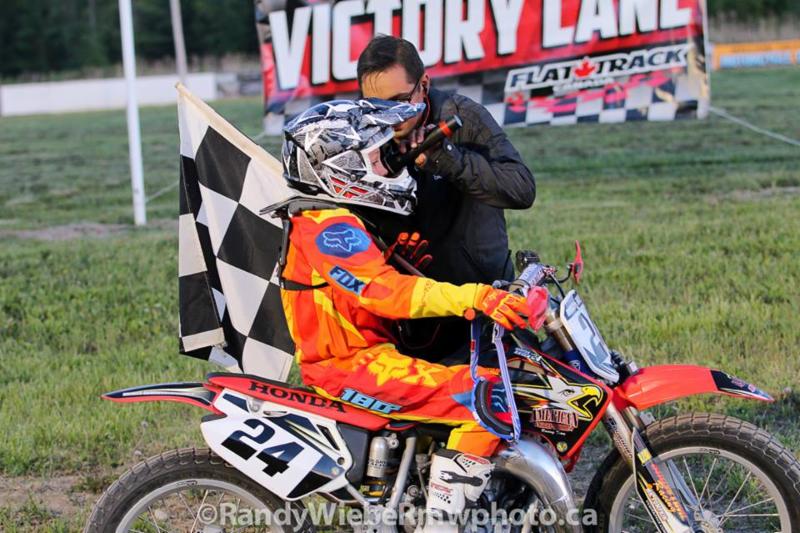 Blake Silenzi pulled off his first Flat Track Canada win in front of his hometown crowd aboard his Suzuki, taking the win over points leader Brandon Keys. 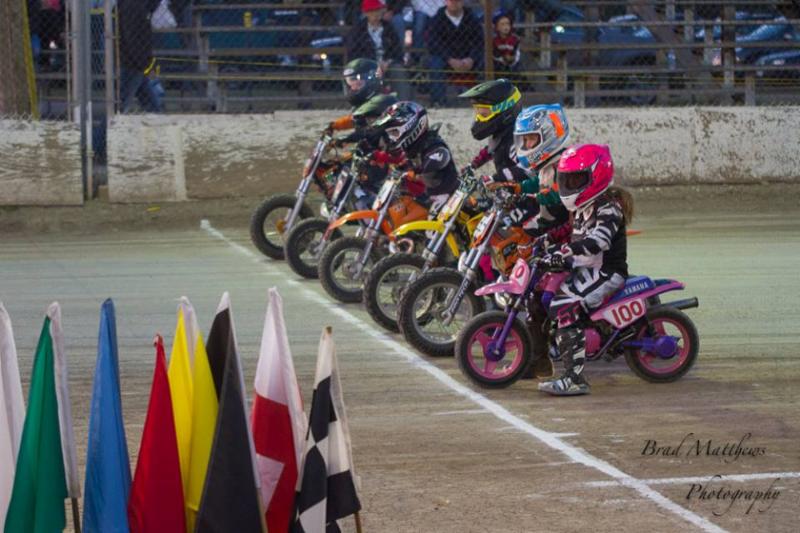 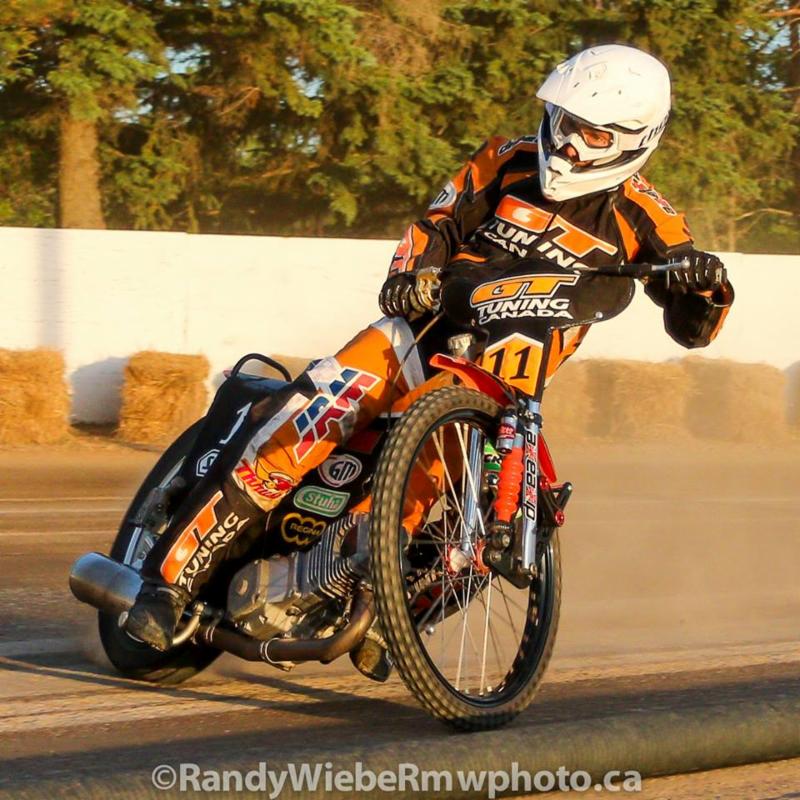 The speedway class had a pretty strong showing of riders as well. Four New York riders decided to make the trek up and make an effort to beating Kyle Legault. Kyle held off Mikey Buman for the win on the very slick conditions for speedway. 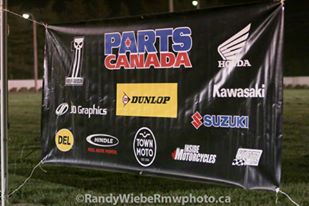 For Results and Standings please visit